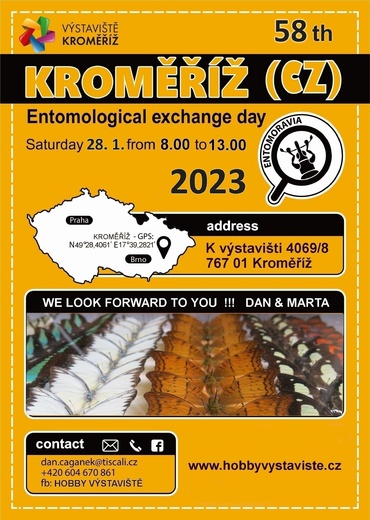 Don't miss the unique opportunity to see with your own eyes the perfect combination of colors, breathtaking bizarre shapes, the smallest and largest types of insects and all this at the entomology day and exhibition.

Hall B will become the venue for an international meeting of professional and amateur collectors, researchers and insect lovers every Saturday in January.

The program will include the exchange, sale and purchase of bugs, butterflies, scarecrows, spiders and other invertebrates. There will also be specialist literature, including entomological needs.

Gourmets can look forward to a rich offer of insects and other specialties presented by world-renowned chef and restaurant owner Milan Václavík.

We have surprise lollipops prepared for children.

The parking lot has a capacity of over 2,500 parking spaces.

When leaving the area, ask for a return ticket at the gate to re-enter the area. If you do not do so, you will be allowed to enter after paying the entrance fee again.

Do you want a worm? The Entomological Exchange in Kroměříž also offered a tasting

Entomology is a zoological science concerned with the study of insects. Insects have many forms of interaction with humans and other forms of life on Earth, so it is an important specialization within biology. The term entomologist includes both people who deal with insects as such, as well as employees of commercial companies that are dedicated to insect control and means for fight with him.

The class of insects is itself an extremely curious group of living organisms on this planet. Above all, it is by far the most numerous community of animals, whether among vertebrates or invertebrates.

Currently, we already know over a million species of these arthropods, which represents more than half of all existing organisms on Earth. At the same time, it is estimated that the total number of all species existing today may be somewhere between 6 and 10 million.

Insects are an extremely widespread group and we find their representatives in almost all world ecosystems. One of the keys to the success of these creatures is probably their incredible shape diversity and high spreading ability. The body, composed of three basic parts – head, chest and bottom, is often covered with a hard cuticle, protecting the insect from the adverse effects of the surrounding environment.

The first representatives of insects appeared on our planet already in the Early Silurian, more than 400 million years ago. Soon after their origin, insects also developed flying forms, which allowed this group to inhabit numerous environments, usually inaccessible to other groups.

Beetles in particular are the focus of scientific and mainly amateur interest.

Already the publication at the beginning of the last century describes their life in a beautiful way. Well, judge for yourself - a few sentences from the book Brouci by František Dlouhé.

"The habitats of the beetles, and therefore the places that collectors have to look out for, are very diverse. It should also be taken into account that although most beetles are active during the day and especially enjoy bright sunlight, at night, during rain and gloomy days, they take refuge in their shelters. However, there are many species that at dusk and at night or after rain they leave their hiding places."

The most described species belong to the weasel family, almost 60 thousand species. When we realize that there are about 40,000 species of vertebrates living in the world today, the richness of the species of weevils - and beetles in general - appears before us in all its unimaginable power.

Photos from the exhibition

Go to the photo gallery